The MiniQube is impressively diminutive but offers the advantage of being able to accommodate 32GB memory, up to two drives and large PCI Express cards, as well as being equally attractive! 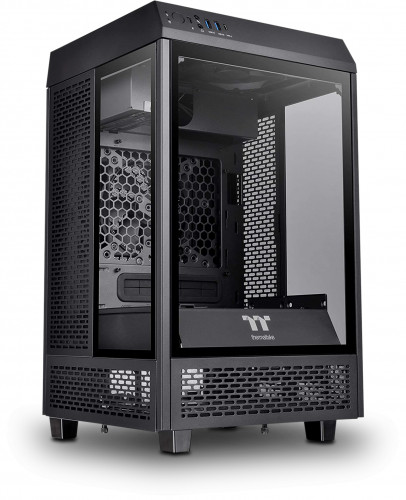 The MiniQube offers an unbeatable blend of style and substance. It can accommodate full-size PCI Express cards and up to two drives. It uses a conventional fully-featured mini-ITX motherboard. And because we offer the latest power-frugal processors, it is cooled without any fans. The power supply is a fully integrated unit so there are no black “bricks” to have lying around behind the PC. We offer an affordable semi-fanless PSU as well a fully fanless power supply. The semi-fanless power supply has a fan that will only operate if its running temperature climbs to dangerous levels, so in normal use there will be no noise, no dust, no moving parts and no maintenance.

This PC takes advantage of Intel’s latest CPUs, which have broken the mould as they now feature more cores and threads compared to previous generations. The Core i3 now features four cores, the Core i5 six cores, the Core i7 has either six or eight cores and the Core i9 is eight cores, which is a significant increase over the previous gen processors. As well as an increase in core count, the amount of threads for each CPU has also gone up, meaning more multi-tasking can be achieved. These additional cores and threads really make the Intel’s latest CPUs a great performer. For example, the Core i3 8300 CPU is now equivalent in terms of performance to the 7th Gen Core i5 7600 but costs significantly less - giving you more performance for less money.

We also have available Intel’s cost effective Pentium GOLD 8th Gen CPUs. These CPUs are perfect for cost conscious customers looking for great performance on a budget. They are ideal for a general purpose/office PC as they have two cores and four threads, allowing for reasonable multi-tasking performance.

This PC has two motherboards to choose from. The main reason for this is due to the fact we have had many customers ask if it is possible to run a 4K @ 60Hz TV/Monitor via a HDMI port. For this to happen there has to be a HDMI 2.0 port, but it is very rare for a motherboard to have HDMI 2.0 built in. That is until Gigabyte released their Z390I Wi-Fi motherboard which features a HDMI 2.0 port as standard. This means it is now possible to run anything at 4K @ 60Hz without the need for a graphics card. This not only reduces the overall power consumption of the system, as no graphics card is required, but also reduces the cost of the system. Of course HDMI 2.0 may not be required for all customers and therefore we suggest opting for the less expensive ASUS ROG STRIX B360-I ITX motherboard if that is the case.

So if you need a lot of storage space (for videos or large quantities of digital photos for example), then we would recommend an HDD. On the other hand, if you prefer silence and speed (especially boot-up speed), then an SSD or M2 drive would be a better choice. Of course, you can have more than one drive, so you could have the best of both worlds by choosing one of each! We recommend that customers choose an SSD or M2 drive as a boot drive that contains the operating system and important programs. A conventional HDD would store other data but remember that if you intend to have a totally silent PC, you might want to forgo the HDDs altogether as they will make some noise due to their moving parts.

Here at Quiet PC we believe that customers have every right to expect the best possible performance from a brand new PC, so every system we build comes with our Clean Build™ promise. We install the operating system (if you order one), motherboard drivers, OS updates and Microsoft Security Essentials / Windows Defender - that’s it. You won’t be pestered by pop-ups and nag screens and you can get on with using your new PC immediately without having to uninstall lots of junkware first. Your new machine will boot in super-quick time and will stay running quickly for many months and years to come.

Our hardware warranty runs for two years and is “collect and return” meaning that you don’t need to worry about getting the machine back to us - we will instruct our courier to collect it from you on a day of your choosing, then after we have checked and repaired it, we will send it back to you by express courier at our expense. In addition, unlike many other PC suppliers, we have an “open-case” policy which means you are free to open the machine and perform your own minor modifications or upgrades without worrying that your warranty might be affected.

“Arranged with consideration to buyers’ intentions”

“I found the way the products and webstire was designed suited the way I was thinking when I was shopping the these specific items. I also liked how the range was good but not extreme, I was not swamped with options but given a price range to suit my budget, very well considered. More pricey? can’t be sure about that, but the time saved over other sites with too many products or poor search filters or insufficient product data made this shopping experience worth every penny.”