With customisable effects, adaptable layout, and interchangeable elements, the Vector becomes what you want it to be: The perfect showcase for any system. 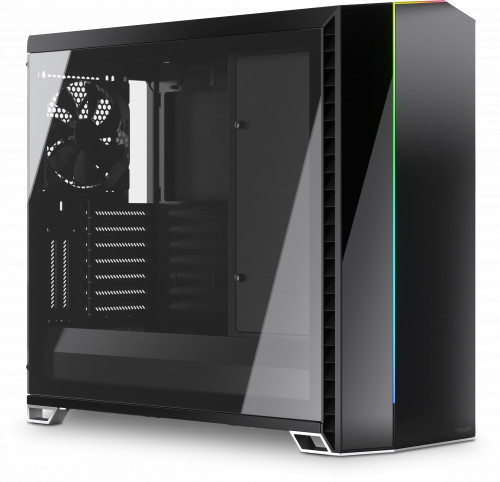 Sharp angles, uncompromising design and a no-nonsense attitude combine to create a case quite unlike any built before it. An expressive ARGB strip wraps the front and top in a synchronised, continuous run, customisable via your RGB motherboard or via the included Adjust R1 controller. The counter-angled air intakes are designed to trap noise without restricting airflow, giving you a case that breathes like it’s open – but sounds like it’s closed.

But looks only go so far. What about the inside? Storage is a non-issue – with eleven HDD and four SSD positions (six + two brackets included), the Vector RS is ready to take on any build you want to throw at it. An intelligent modular layout adapts to maximise airflow, water-cooling, and component headroom to realise every ounce of potential in your build. The TG top panel easily swaps with the included ventilated steel cooling bracket to shift Vector’s affinity from ultimate display piece to performance powerhouse with nine total fan positions.

With customisable effects, adaptable layout, and interchangeable elements, Vector becomes what you want it to be: The perfect showcase for your system.

“My experience was very nice, thank you for a very good service”